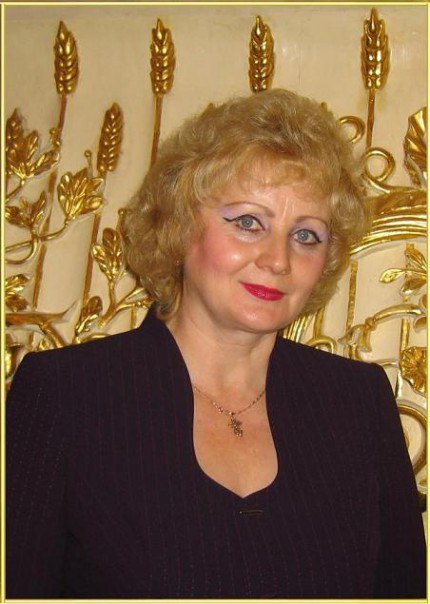 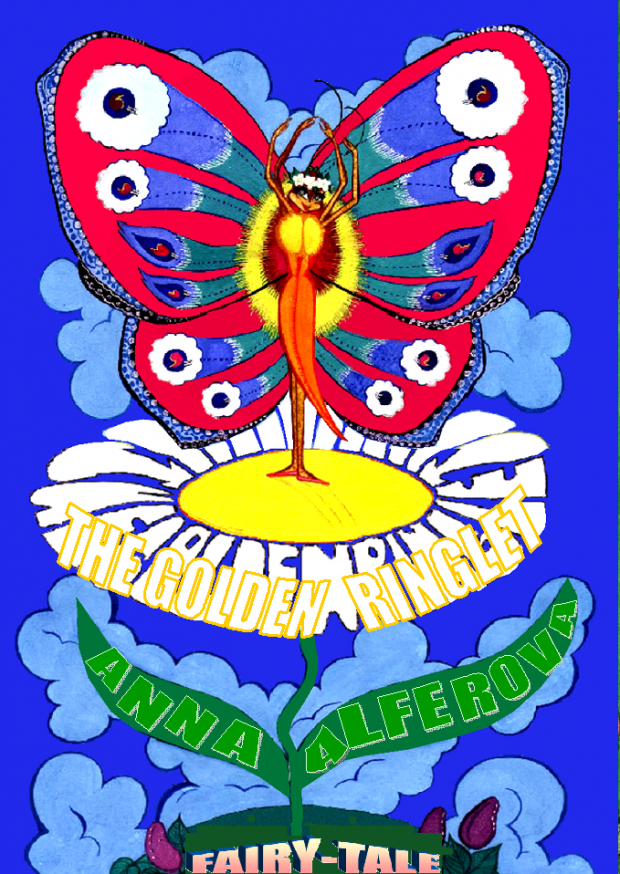 Once upon a time there lived a bright beautiful butterfly. She made her home in a big yellow water-lily. At night it shielded her from cold. Butterfly it in the morning the butterfly left her house and flitted past flowers. The warm caressing sun lightened her bright wings and they were shining in the sun.

- Good morning, Sun! – she flew up high in the sky and greeted the sun.
- Morning, Golden Ringlet! - was the answer. The butterfly was named so because of the yellow ringlet that could be seen on her coloured back and her wings.
- What beautiful wings our butterfly has! I would like to have the same! - a green dragon-fly said to her friend.
- Nothing like it! - admired the other.
Oh yes. She is a real beauty! -

Our butterfly was very merciful and her life flying farther. She was flying farther
She greeted everything: flowers and grass, bugs and dragon flies, crayfish and fish that was seen in a grey-blue wave of not far from the shore. And everybody greeted her back, surprising and enjoymg themselves. So Golden Ringlet spent all her time.

One day a boy came to the lake and brought a glass jar with a big green frog in it. It was of great interest to him to see how the frog could swim and he let it out into the water. But the frog was very cunning and cut it sticks in the reed′s thicket. The boy tried to find the frog but in vain. The slyboot kept quiet till the boy went away.
-Easy come, easy go. I am glad to be free again! - the frog was croaking and lumping with joy.

So the frog stayed at the lake and got settled near the biggest boulder. Three days passed. He soon got used to the new place; got to know his neighbours and lived quietly and simply. After a while he noticed the pretty butterfly and turned green with envy.
- I don′t think it is difficult to fly!
I will be able to fly too! - decided the frog and asked a sparrow to teach him to fly. The sparrow was very surprised and chirped:
- What for, green frog, I wonder? Chirrup – Chirrup!

- Don′t have long ears! Teach me, as you have learnt! - the obstinate frog croacked and gobbled a flying mosquito.
- He is not just green but angry and mad. - the sparrow thought. I′ll show you - it costs me nothing.
But it′s very funny all the same, You need wings to fly. But it you want...
- Have a look, Frog! It is the easiest thing. You must straighten the wigs and... The sparrow cried out from the boulder, then he flapped his wings and disappeared.
Well, it′s very easy, - muttered the frog climbing up the boulder. I am straightening my paws and...
Croak - he flopped into the water.

He was waving his paws all day long but couldn′t fly up. In spite of all the butterfly appeared. She was flitting and flapping her wings like a fan. The frog looked at her wings and couldn′t believe his eyes- everything went dark before them.
- Look! Her wings are not bright they are grey.- croaked the frog. Golden
Ringlet! Golden Ringlet! She has taken off her bright clothes and washed herself. What a view! – he thought.
Hardly had the sun risen when the frog hurried to the pike and began to croak loudly:

- Believe it or not, Miss Pike, but poor Golden Ringlet is not a colourful butterfly at all. I saw her before going to sleep yesterday - it was grey. I am sure that in the morning she usually dresses up, sticks flowers leaves to her grey wings and shows off before all of us. It takes her a lot of time to... -
-Wh-a-a-t?! For all I care leave me alone! - the pike showed its teeth. The frog was frightened to death and said politely: "Sorry for my troubling you. Miss Pike. May I leave you?"
The frog decided to swim to the crayfish.

Towards evening everybody on the lake Knew this frog′s news.
- We should not only greet her but even nofice her- insisted the frog.
- Yes, you are right! - agreed a watergnat.
- Why did she deceive us? -
- I do not know how I can believe it - doubted the dragon-fly - but I liked her very much -
- Well have to believe it - said the black whirling beetle.
- Well, if the whirling beetle said it- then it′s all right. - calmed down the dragon-fly.

At that time Golden Ringlet was staying with her aunt Lanita in the gardens.
- My dear aunty, what a beautiful garden it is. How many flowers there are. -admired Golden Ringlet.
-Look around. That would be charming it you stayed here forever. We′ll choose the biggest and the most beautiful flower for you to live - suggested the aunt.
-No, I′m afraid I can′t. I like my lake very much! I want you to see it by yourself. I have many true friends there! Let′s fly to see them. - Aunt Lanita was eager to see the big lake, the picturesque shore and the friends of her dearest niece and decided not to put off the visit and to fly the next day in spite of expected rainy weather.

The next day when Golden Ringlet got up her aunt had already cooked some pollen and two pure dewdrops for breakfast.
- Good morning, dear aunty!
- Good morning, My darling!
- Do you know why it was so thundering at night?

- Ripe apples were falling down.
- I thought it was the thunderstorm.
- No, it will be later - said the aunt and offered her to wash with the dew. Golden Ringlet made her toilet and before having breakfast she greeted the Sun. -
- That′s very sunny this morning! I′m glad to see you, Sun! -
- Nice to see you too. - the sun welcomed smiting. I wish you a fine day, -
- Oh, what a wonderful morning - the butterfly sang joyfully. The early morning freshness and beauty made her happy. After breakfast Golden Ringlet and her aunt went to the lake. The wind was blowing to meet them.
- Hallo, fresh Breeze! Why don’t you want to help me to return home, I wonder? Will you be so ring as to turn around - Golden Ringlet asked, I beg you, fly with us. The wind didn′t want to upset them. They were so light and that′s why. It changed its direction and they flew together with the wind to the yellow water-lily.

- This is my house! - said Golden Ringlet, pointing to the yellow water-lily. -
- We′ll have a rest for a while and then I′m going to show you the lake.
- Your house is rather spacious and cosy. I like it here - said the aunt, making herself comfortable on the petal.
- Look, here they are. - The frog began croaking. -
- Yesterday there was one but now there are two of them and how many will there be tomorrow? -
- However, they are so delightful - exclaimed the dragon-fly. She had forgotten about yesterday′s talk. But the frog was not long in reminding and the dragon-fly came silent. The black whirling-beetle flew up to the water-lily and began making fun of the butterflies - Ch-ch-cheating us, aren′t you? Have you painted your wings yet?

He looked down upon them with his prominent eyes and buzzed: It′s horrible! -
The butterflies exchanged glances, - What′s going on here? – Golden Ringlet asked the water-lily.
- The frog-scoffer doesn′t want you to live here. - was the answer. – He feels ugly next to you.
But, - the butterfly wanted to object. But she only looked at her aunt, and was croaking loudly. - You′d better fly away, beauty! -

- But I was born here and I′d like to be among my friends -
- Who do you mean? -
- For example, the bumble-bee. -
- Well, the watergnat -
- In no case -
- Maybe the grasshopper is my friend -
- You don′t say so - squeaked the grasshopper. Golden Ringlet was staggered to hear that.
- And what about you, Crayfish? Will you dare call me your friend? -
- If it thunderes in the sky! — the crayfish chaffered his jaws.
- Really? You don′t mean it! - Golden Ringlet wrapped herself by her wings and cried bitterly.

The curious clouds began gathering over the lake. They covered the sun and were looking from the sky - Whom are we going to laugh at? -
But suddenly there was a clap of thunder and the frightened clouds gathered in one big black cloud.
It began raining.
The frog was jumping and teasing - Soon, you′ll see how gold she is-

Golden Ringlet was so disappointed that bad no time to flv for shelter and got wet through. She felt ashamed and was afraid that her aunt would laugh at her.
But her merceful aunt tried to do her best to console her poor niece.
But the frog kept on winning over his view:
- Well? Who is right? -

After rain came fair weather.
The sky cleared up and the sun was gently warm. It looked around and began singing:
The flying clouds
Are wisards without all doubts
After a walk in the sky
They are tired and began to cry
The tears fell out of eyes
And clean earth began to shine.
Merry clouds didn′t waste their effots - everything became clean and fresh!

But the sun saw Golden Ringlet sobbing and wondered –
- What has happened? Are you crying? -
- Oh, I am not. I′ve just got wet through -
- Well, I can help you.- said the sun and dried the butterfly′s wings. They appeared to be brighter than before.

Aunt l.anita exclaimed - My dear you are not only charming but also very kind.
- Wh-a-a-t a clumsy butterfly! - croaked the frog and hid in the reed′s thicked.
The delicate rainbow appeared over the lake. The birds began singing. The leaves were trembling and the gentle breeze was rustling the grass. The air was full of the smell of wild flowers. Golden Ringlet forgot about her troubles and said to her aunt - Let′s fly and see where the rainbow begins. The aunt agreed and they flew away flittering from one flower to another.

The green dragon-fly watched them fly and said to her friend - Such beautiful wings... I′d like to have just like these. -
- That′s right. Golden Ringlet is a real beauty! Answered, the other.
- I’m very s-s-sorry! It s just a misunderstanding – It’s just a misunderstanding – the bumble-bee buzzed.
- Yes, we should apologize - said the watergnat.
- Do you think wre need? - doubted the whirling - beetle.
- Let′s ask the crayfish for his advice - squeaked the grasshopper.

They went to the crayfish and asked him:
- Will you tell us, dear Crayfish, what should we do?
- Don′t you know? Haven′t you heard? Has it thundered? - It has. It means that Golden Ringlet is a friend to me!
- And to me too - squeaked the grasshopper.
- And to me too - said the watergnat.
- And to me, and to me , - these words were heard every where.

Lovely things happened again.
Everybody played his own tune and sang his own song, and they turned into the fairy-tale music of the nature. Only the frog sang out of the tune but nobody listened to him no more,